Ultrasonographic features of anaphylaxis in the dog

Anaphylaxis is familiar in human medicine and as a general concept the idea of a systemic, immediate hypersensitivity reaction is straightforward enough. However, strict defining criteria for a diagnosis of anaphylactic episodes have proved more difficult.  The phenomenon is much less commonly documented in domestic pets than in people.

This case relates to a young, otherwise healthy Boston Terrier who apparently ran into a wasps’ nest.  After reacting as though stung, within a few minutes he suffered acute onset weakness with mucous membrane pallor, vomited and then developed symmetrical facial swelling.  On presentation at the clinic shortly thereafter he was weak and bradycardic.   Glucocorticoids were administered and intravenous fluids commenced.

Ultrasonography was performed about 20 hours later: he remained anorexic and depressed.  At this point facial swelling had subsided but a diffuse erythematous rash was apparent on clipping.

Thoracic sonography proved unremarkable.  However, there was a small, non-turbid, abdominal effusion: 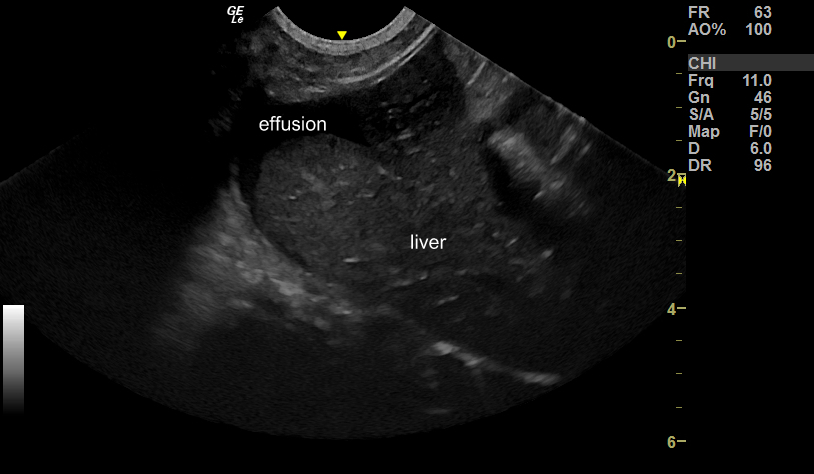 sagittal plane view of the liver from the ventral midline

The pancreas is oedematous with subcapsular and interlobular fluid, but lacking hyperechoic peri-pancreatic fat (which would normally accompany acute pancreatitis):

The gallbladder wall is thickened:

And the portal vein wall is also thickened (up to 1.5mm): 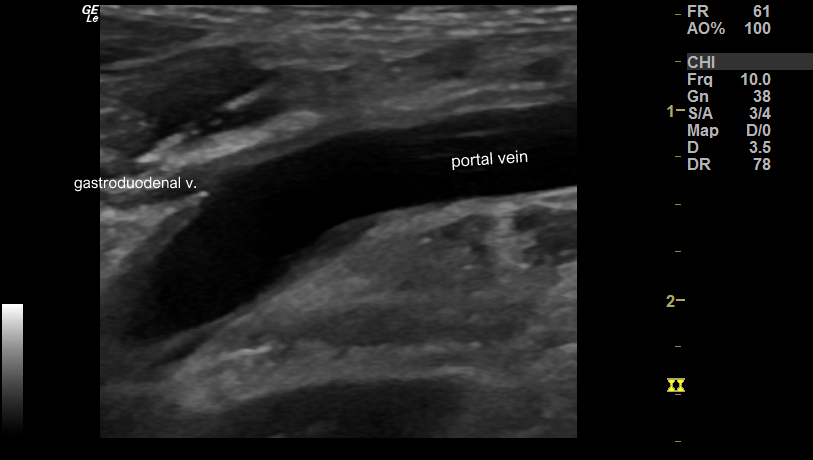 ALT was elevated to 8 x top end of reference range but other biochemical parameters were unaffected.

Happily, with supportive treatment thing improved and within 48 hours he was back to something like normal.

His portal vein at this point now looks completely unremarkable:

The effusion had resolved and the pancreas also appeared normal.

Marked inter-species differences in the pathophysiology of anaphylaxis are reported.  In dogs generally, as in this patient, the gastrointestinal tract and liver are predominant target organs.  Histamine is released from the gut within seconds of the inciting incident and reaches  the portal vein and thus the liver where it induces hepatic vein constriction. Hepatic parenchymal and portal vein congestion follow and are typical findings at post-mortem in fatal cases.

A good recent review is here:

As yet I’m not able to find any previous reports of sonographic findings in dogs affected with anaphylaxis. The swelling of the portal vein wall is unique in my experience.  Please tell me if there is something written up somewhere that you are aware of.

Cardiac manifestations of anaphylaxis in dogs 19/07/2020